The weather outside was frightful, but the children’s cheer inside of Francis of Paola Early Learning Center was only delightful. On December 18th, 2018, the school held its annual Winter Carnival and was paid a visit by its local Assemblyman, Joseph R. Lentol. The assemblyman came to meet with the children and staff members as well as view the ways technology is being used in the school as a result of a grant Francis of Paola received from the New York State Assembly.

As part of the Winter Carnival, children created fake snow, played winter-themed games with one another and with their teachers, and learned about what winter weather entails and which holidays are celebrated in late December. Assemblyman Lentol joined in on the fun by joining the kids in their games and asking them what they were looking forward to during the holiday season. Teachers at the school showed the assemblyman various videos, photos, and lessons that have been uploaded to iPads that were provided to the school thanks to the Assembly’s grant.

Later, Assemblyman Lentol joined over two dozen children and teachers in a classroom where a SmartBoard has been set up. The SmartBoard allows for interactive and engaging lessons. The assemblyman sang a number of holiday songs with the children and was introduced to the kiddie-song sensation “Baby Shark,” which all of the students enthusiastically knew the words to.

“It was a pleasure to attend Francis of Paola’s Winter Wonderland Celebration,” Assemblyman Lentol said. “I was thrilled to see the students interacting with the new technology.  It showed me and I am sure others would agree that technology exponentially helps a student’s learning ability so it’s important that we invest as much as we can in using technology in the classroom.” 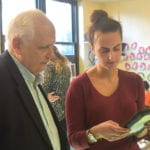 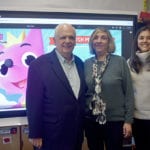 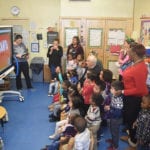