“Pomp and Circumstance” rang through Kings County on June 25 and June 26 as students from Brooklyn Blue Feather Elementary School (BBF) and AHRC Middle/High School (MHS) celebrated their graduation days. Both ceremonies were filled with emotions, music, and recognition of the great strides made by remarkable children and young adults.

Father Michael, whose church has supported BBF for years and helped maintain a beautiful educational environment, gave an Invocation in which he recognized the accomplishments and dedicated staff, students and their families.  Former BBF parent, Lauren Ramirez, spoke on the importance of continued advocacy during the transition from elementary school to middle school.

Following a musical performance, Vice President of Education, Christina Muccioli, honored retiring principal, Zoe Ann Deeds.  Through tears, Christina presented Zoe Ann with a feather-adorned plaque to recognize the 11 transformative years that Zoe Ann helmed BBF. Zoe Ann then presented the staff and student awards for stand-out citizens within the school.  The students then received their diplomas and celebrated with their families at a reception sponsored by the school’s generous PTO.

The following day, five graduates from MHS were presented with their diplomas. Robert Bright III, Sean Fischer, Kevin Guo, Montae Peterson, and Nicholas St. Clair were celebrated for their achievements as they prepared to enter a new phase in their lives.

The MHS Choir, accompanied by their music teacher, on piano and Michael, a student, on drums, opened the festivities with a performance of “Seasons of Love” from the musical Rent. The choir later provided their renditions of the upbeat pop jams “Drag Me Down” by One Direction and “Can’t Stop the Feeling” by Justin Timberlake.

The graduates were all presented with special commendations from Office of the Attorney General of New York State, celebrating their community partnerships such as the one with Pace University. MHS also recognized Poly Prep Country Day School and Maimonides for their volunteering and employment initiatives, respectively. Finally, the school presented Karen Zuckerman, Director of Volunteering Services and Corporate Engagement, with a plaque honoring her commitment to developing volunteering opportunities for the school, including at Poly Prep.

Christina Muccioli thanked Madelin Rivera, Interim Principal, for her consistent passion and stewardship during a transitional year for the school. Finally, Christina congratulated the parents and graduates and encouraged them not to become strangers. “AHRC is here for you for a lifetime,” Christina said. “We want you to keep in touch with us. You are a part of the AHRC family and we want you to always remember that.” 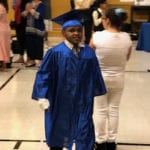 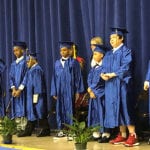 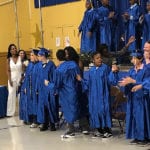 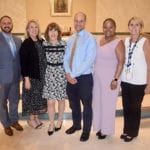 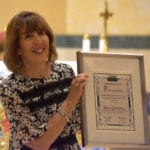 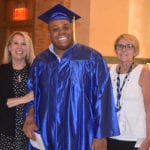 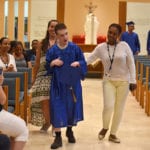 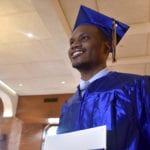