AHRC New York City was founded in 1949 by parents of children with developmental delays. This was a time when there were few services available – their children had been largely ignored or forgotten by society. These parents initiated a grassroots movement that forever changed the lives of their children and generations of other children. 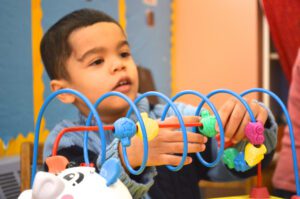 AHRC NYC created an Educational Services department to oversee instruction and service delivery to children in their schools, all of whom could not be served by the public schools. The special education classes that AHRC had established, (long before the passage of the federal law that mandated such services,) were in 1974 ceded to the New York City Department of Education to serve as a model for their own public special education school-age system, as they were being developed.

Over time, many of the preschoolers served by AHRC NYC were children with autism. As these children grew older, there were few autism resources available in the city and their parents advocated for the creation of an AHRC NYC elementary school. The Brooklyn Blue Feather Elementary School, (BBF), serving primarily students with autism came into existence in 1998.

Our Elementary School was followed by AHRC Middle/High School in 2004. As was the case with all AHRC NYC schools and initiatives, the driving force behind the development of services were family members and their desire to identify and provide the best in services to their sons and daughters.

At the current time, AHRC NYC can proudly state that we serve students with developmental delays for the entirety of their educational and school-age years, with the fundamental goal for all students being to prepare them to live the most productive, worthwhile, and independent lives possible in the community.