Students at AHRC Middle/High School were given the gift of music this holiday season. Sing for Hope, a non-profit seeking to expand opportunities in the arts in New York City, donated one of their famous pianos to the school in the fall and formally christened the instrument with a ceremony on Thursday, December 14th.

About Sing for Hope’s Pianos

“We get artists that come in to paint about 50 pianos that get placed in public spaces during the summer months, and then the pianos are donated to schools,” said Daniel Smiertka, a representative from Sing for Hope. “Usually the students don’t have access to instruments like this because pianos are a lot of money to buy and maintain.”

You may have seen a Sing for Hope piano before without realizing it. In June 2017 they were found in all five boroughs, usually in frequented areas such as Central Park, Grand Army Plaza, and the boardwalks in Rockaway Beach and Staten Island, (several were installed at Liberty Plaza near AHRC New York City Headquarters). Each piano has a unique design reflecting an artist’s personal vision of the Sing for Hope mission.

MHS’s piano was designed by Jennifer Kakaletris Boyar and was previously located at Dag Hammarskjöld Plaza near the United Nations complex. It has Keith Haring-inspired lettering and designs, with Lady Liberty and the phrase “Art for All” spread throughout.

“I saw the pianos first on the street years ago, and this past year I was inspired to give a piano submission and it’s been awesome,” Jennifer said. “I’m so honored it’s here, it’s so cool. While I was working on it I thought about where its final home was going to be, and it looks great here.”

We’re All in the Mood for a Melody

MHS Principal, Andrew Winfrey said that the school applied for the piano over the summer, and it was delivered in early October. At the ceremony on December 14th, the piano was introduced to the school at large by Frank Malloy IV, Sing for Hope’s Program Manager, and Neil Davis, a New York City-based singer-songwriter.

“I’ve gotten to volunteer at hospitals and schools underserved with music,” Neil said. “I love the mission and as an artist myself it’s always nice to get [the music] out of you and bring it forward for other people.”

Neil first led all students in a musical scales exercise to warm up their vocal chords. He then played an original song that had plenty of collaborative singing before finishing up with a few songs in the Christmas canon, such as “Jingle Bell Rock” and Wham!’s seminal “Last Christmas.”

“We’ve done so many different schools and seen so many positive reactions,” Neil said. “You realize how universal music is.” 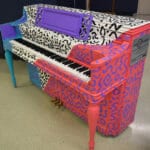 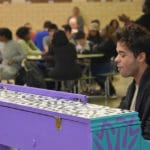 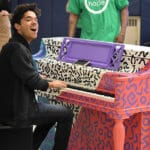 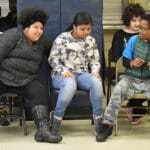 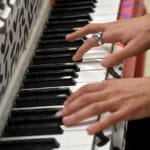 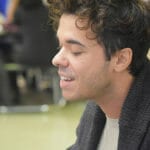 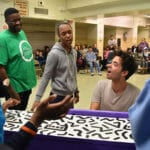 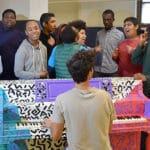 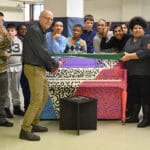