The children at Astoria Blue Feather Early Learning Center were in for a surprise when they returned from this year’s spring break. Due to the generosity of the Metropolitan Building Managers of New York in cooperation with the Scandinavian American Building Managers Guild, the entire school received a full remodel over the course of a week, at no cost to AHRC New York City.

From fresh new paint to buffing the floors and everything in between, Astoria Blue Feather got an unexpected head start on providing better education to dozens of children.

“It’s overwhelming to see how so many are able to pitch in to make this school the best-looking preschool,” Denise Polanco-Nieves, Principal, said. “To me, everyone that has come to donate their time for this, I see them as angels.”

Curt Bergeest, a Residence Manager for a building in Manhattan, was among the leaders in this charitable endeavor and has done similar work in the past. “We usually work with Ronald McDonald Houses, cystic fibrosis foundations, places like that,” Curt explained. “Mary and Steve Weafer [whose son attended Esther Ashkenas Central Park Early Learning Center and the AHRC Middle High School] contacted me about this school, and we have this group of wonderful men and women who volunteered to help out.”

In addition to a complete remodeling of the school, the volunteers donated a voluminous amount of school supplies, including crayons, copy paper, pencils, and notebooks. Many of the building materials, such as paint, were donated by generous vendors that included Belfor Property Restoration and Franklin Lennon Paints. Many volunteers are members of the 32BJ SEIU union.

“It’s easier for us to come out here and just do the work rather than donating money,” Thomas Louie, one of the volunteers and a former teacher, said. “You can see the change that takes place. It’s a proactive approach, everything gets done right away. The kids will come in on Wednesday [April 19th] and just be shocked at all the work.”

Upon returning from spring break, one child said “Oh wait a minute, the classroom looks different, it was yellow and now it’s purple. But nobody told us!” Another remarked, “It’s so pretty! I saw colors on the window: blue and red, blue and red.”

“They surpassed our wildest dreams,” Christina Muccioli, Director, Educational Services, said. “The volunteers came in here and said ‘We’ll paint!’ but they did so much more than that. They did extermination, they brought in program supplies. There was a plumbing company, replaced radiators, supply companies. They truly are angels.”

AHRC New York City extends its deepest thanks to Curt, Tommy, and all of the other volunteers and organizations for donating their time and materials to transform Astoria Blue Feather and allow us to better educate children with disabilities. 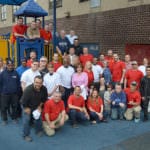 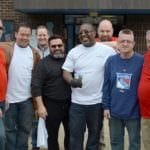 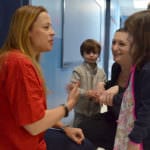 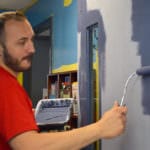 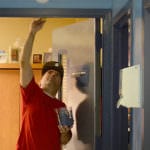 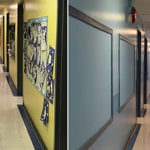 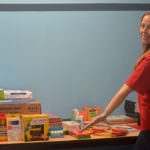 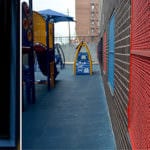