During a gorgeous spring evening on Friday, May 20th, the Metropolitan Museum of Art opened its doors for an event titled Teens Take the Met, which invited teenagers across New York City to visit the museum during evening hours, to enjoy art making, performances, gallery activities, music, dancing, and more. Students were allowed into the museum for free in an effort to increase art awareness and to participate in various activities developed by outside organizations on behalf of the museum. Over 40 cultural and community organizations helped make the evening special by providing teen-only activities such as creating music and art pieces, jewelry design, dancing, poetry and song writing, film, fashion, pattern making, stop motion animation, arts and crafts, and other art-inspired collaborative activities.

AHRC New York City added to the festivities by providing attendees the opportunity to create a collaborative pattern collage as well as advocating for people with autism and other developmental disabilities. AHRC NYC’s booth, located in the Arms and Armor Exhibit, was safely nestled among dozens of medieval knights resplendent in full sparkling armor. The activity, developed by AHRC Middle High School and Brooklyn Blue Feather Elementary School Art Teacher, Priscilla Palmieri, encouraged visitors to create patterns for use in a collaborative collage, with each person adding their own unique perspective to the project. Students of all ages visited the booth to participate in the fun.

“As one of the only Art Educators collaborating with over 40 different organizations from the Greater New York City area, I felt honored to work together with everyone to have teens engaged in the art making process,” said Priscilla.  “I had the pleasure of working with several Met staff who were extremely helpful and considerate in helping to meet the needs of my students.” 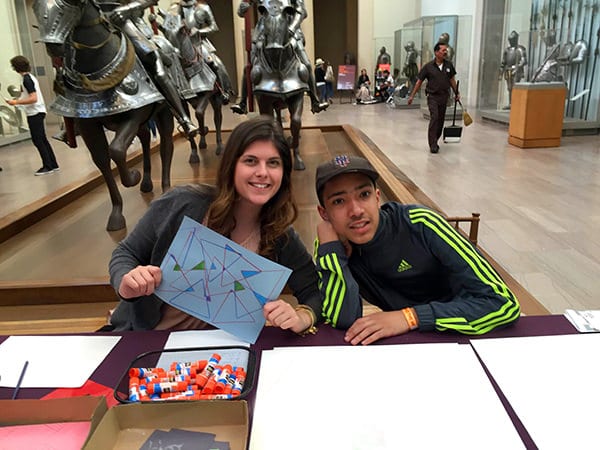 The diverse range of activities held by other organizations allowed for the teens to explore various art mediums and interests, as well as practice positive social interactions.

“I … plan to maintain a relationship between AHRC and the Metropolitan Museum of Art,” added Priscilla. “They have plenty of resources to offer our students, and I love how they have made it possible for us to interact with other organizations within the community.”

AHRC New York City is proud to celebrate events such as this, which allow our students to share their creativity while engaging in social activities with their peers. Thanks also to AHRC NYC’s Christopher Chin, Education Training Director, and John Goodson, Staff Training Director, of Educational Services, who helped to coordinate this event.