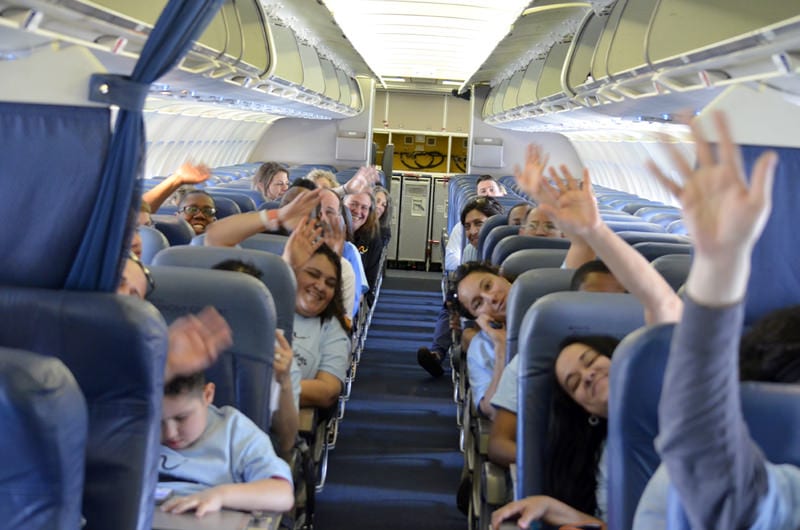 Oftentimes, visiting the airport can be unpleasant, to say the least. For children with autism, the long lines, constant noise, and other stimuli can be completely overwhelming and make travel impossible. To help combat this, on April 18 AHRC New York City took part in the Arc of the United States’ Wings for Autism program at LaGuardia Airport.

Wings for Autism is an airport “rehearsal” specially designed for individuals with autism spectrum disorders, their families, and airline professionals. The program is intended to reduce some of the stress that families who have a child with autism experience when traveling by air. Families from AHRC NYC’s school-age programs arrived at LaGuardia at noon, and proceeded to get their own boarding passes, go through security, and even get on an airplane!

“This was very exciting!” Andrew Winfrey, Principal of AHRC NYC’s Middle High School, said. “And it’s been really helpful to a lot of the parents. The airport staff was very helpful and made us feel welcome. We helped a lot of families be able to travel and have trips.”

“Taking Nicholas out in public, it’s always questionable how he’ll behave,” Ray Ferrigno, Third Vice President of AHRC NYC’s Board of Directors, said. “So to go into a novel setting like this and have it run so smoothly is wonderful. I really want to thank Homeland Security and Delta for treating us so well.”

We thank Joanne Feltman of LaGuardia Airport, Guy Lainis and Veda Simmons of the Transportation and Security Administration, the staff of Delta Airlines, The Arc of the United States, and the staff of AHRC NYC’s Educational Services for their efforts in organizing and facilitating this rehearsal, for all of the support that they have provided to families.