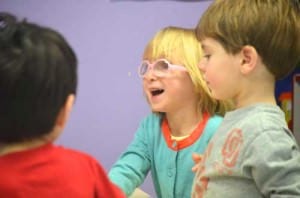 Verbal Behavior (VB) is a communication theory that proposes that language, like any other observable action, is a learned behavior that can be acquired, developed, and sustained through the application of behavioral strategies (i.e. prompting, reinforcing, planned ignoring, etc.).  Supporting language and communication development with VB strategies differs from other traditional theories of language, but shares the common goal of promoting more effective, appropriate, and consistent communication proficiency in children who have inherent difficulties in acquiring these skills.

What is the Idea of Verbal Behavior (VB)?

The theory of Verbal Behavior (VB) was initially put forth by BF Skinner in the 1950s.  In his research, Skinner suggested that language is a learned behavior that responds to outside reinforcement and that the most effective way to promote communication development is to address language through the analysis of these interactions. Resultantly, Skinner indicates that language instruction should be grounded in the principles and strategies of applied behavioral analysis (ABA). Therefore, the child’s verbal behavior (language and communication skills) can be shaped, increased, and modified using the laws of behavioral change, and language growth is affected and mediated by the response the child receives.

At the center of Skinner’s VB-based language analysis is the recognition of language units and their specific purposes for the speaker.  Verbal behavior analysis requires the perception of the specific meanings of and differences between the six elementary verbal operants: mand, tact, intraverbal, echoic, textual, and transcription. According to Skinner, the initial training should focus on the concepts of mand, tact, intraverbal, and echoic–these four communication skills mark the necessary starting points for children’s language development. The following section provides brief definitions and examples of the core and secondary terminology:

How Does VB Benefit Those with Autism?

Although Skinner’s VB approach was not designed for children with Autism Spectrum Disorder (ASD), research has suggested that verbal behavior interventions for learners with autism are a highly productive way to improve their communication skills. Given the well-documented success of ABA strategies to improve the behaviors of individuals with ASD, the effective extension of these techniques to the domain of language is not surprising. The process of employing verbal behavior to treat children with ASD begins with a thorough assessment of the individuals’ present skills and deficits in language. In many cases, the VB-MAPP, a verbal behavior-based assessment tool, provides the requisite information. Based on the unique language and skills profile of each thoroughly-assessed individual with ASD, teachers can then create educational programming that helps remediate specific deficits and subsequently increase independence and inclusion.

What Is the Role of VB in AHRC New York City Schools?

The VB approach to teaching language to children with ASD and other disabilities is primarily used in our preschools and elementary schools.  We have BCBA supervisors and instructors in these settings who oversee the VB approach and ensure that the teachers are correctly assessing the students and in turn, providing instruction that is derived from the child’s language and learning profile. When the VB approach is being used, teachers start with either the VB-MAPP or the ABLLS assessment tool, both of which have ample evidence of their thoroughness and utility. These assessments, on which the teachers have been extensively trained, inform the creation of goals and objectives to remediate children’s specific language and learning issues. With VB knowledge, teachers and administrators can clearly track students’ progress with language and identify any barriers that are impeding their development.

Our schools have utilized ABA strategies from their inception and because of instructors’ previous experience with behavioral approaches, the introduction of VB analysis is a logical extension and seamless addition to classroom curricula. There is considerable evidence that the VB approach is an effective way to improve the language and communication skills of students with autism and our students deserve the most efficacious approaches. Communication intervention is a challenging endeavor for students with ASD who inherently struggle with language, but fortunately our well-trained and well-supervised staff recognize the potential of VB to address the deficits and continue to apply VB concepts in their programming.